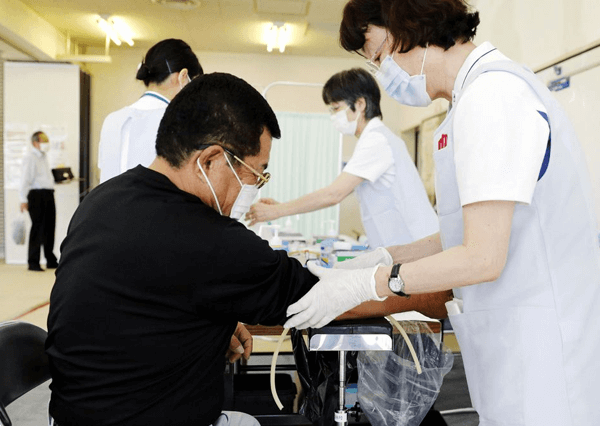 The health ministry began testing around 10,000 people for coronavirus antibodies Monday to get a better grasp of the nationwide scale of infection after the state of emergency was lifted last week.

The tests, which look for specific proteins made by the immune system in response to infection, are being held in Tokyo and in Miyagi Prefecture. Osaka will follow suit on Wednesday.

The government’s aim is to find out roughly how many people were actually infected in the first wave, including those who showed no symptoms, to see if Japan achieved “herd immunity.”

The blood tests are being held on 3,000 randomly selected residents 20 or older in each prefecture who agree to be tested.

The results are expected to guide the government’s outlook for future infections if a feared second wave takes place and estimate how many people will need to be vaccinated if a vaccine becomes available.

At a test site in Tokyo’s Itabashi Ward, a nurse from the Japan Anti-Tuberculosis Association wearing a face shield, mask and gloves, explained to the media before the tests began that it takes about one to two minutes to take a blood sample.

“Knowing the actual conditions of infection should help the government take measures in the future,” an association official said.

In Natori, Miyagi Prefecture, a 69-year-old man who took the test said he has not felt ill since the epidemic began.

“I hope my data will help society,” he said.

The tests for COVID-19, the contagious respiratory disease caused by the virus, which first emerged in Wuhan, China, late last year, will use three methods and take less time than the polymerase chain reaction test, which uses a swab from a patient’s nose and requires several hours to produce a result.

Japan has logged more than 17,500 official infections and over 900 official deaths. The Abe administration fully lifted the national state of emergency on Monday last week.

Tokyo and Fukuoka Prefecture have seen infections rise in recent days, but the government said it has no immediate plan to place these areas under emergency status again.