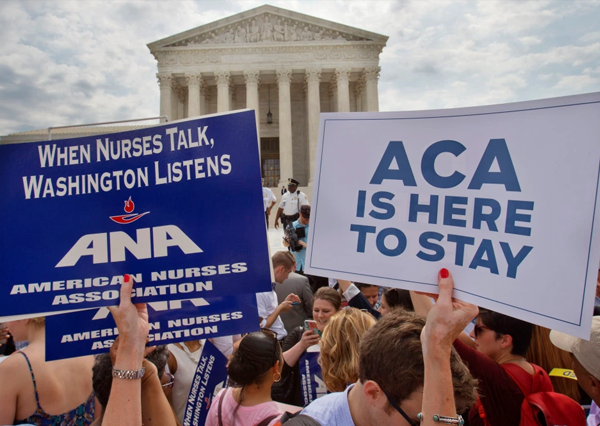 Just months before the presidential election, and with COVID-19 cases on the rise in many areas of the country, the Trump administration has filed a brief asking the Supreme Court to invalidate the Affordable Care Act, which would result in millions of Americans losing their healthcare coverage.

The ACA, which is still in effect, is subject to a pending legal challenge before the Supreme Court.

In the filing, Solicitor General Noel Francisco said the ACA should not remain in effect because the law’s individual coverage mandate and two key provisions are invalidated. If the move to nullify the law is successful, upwards of 20 million or more Americans would stand to lose coverage.

The legal brief was filed late Thursday night in support of California v. Texas, and contends that individual and state plaintiffs in the case have established a reasonable challenge to the minimum coverage provision in Section 5000A of the ACA. Section 5000A requires that for each month, an individual and any dependent is required to have “minimum essential coverage” or else face financial penalties.

Since Congress reduced the financial penalty to zero in 2017, the administration claims the mandate is unconstitutional, citing Section III. In December, a federal appeals court ruled the mandate was unconstitutional but had nothing to say on whether the entire law should be invalidated.

The brief states that Congress’ intent when it eliminated the financial penalty was to end the ACA.

The move comes as former Vice President Joe Biden, the presumptive Democratic presidential nominee, is making a push to protect, strengthen and eventually expand the ACA by making federal premium subsidies more generous, and allowing more Americans to qualify for subsidies. Biden is also a proponent of adding a government-run public option to the existing law, and he would lower Medicare eligibility to age 60.

Ending the ACA was once a cornerstone of the Republican policy platform, and for a time it gained them favor with Americans, helping them to win the House and the Senate in 2010 and 2014, respectively. But repeated calls to “repeal and replace” the law amounted to nothing, and voters flipped on the issue, giving the House back to Democrats in 2018.

The Trump administration has assured the public that Americans with pre-existing conditions would still be protected if the ACA was no longer in effect, but the White House has not specified how this would be the case.

In February 2018, 20 states, led by Texas, brought the lawsuit against the federal government challenging the constitutionality of the Affordable Care Act because the individual mandate had been abolished.

Following the enactment of the Tax Cuts and Jobs Act of 2017, Americans no longer had an individual mandate to buy health insurance, which left the remainder of the ACA unconstitutional, the states argued.

In the earlier case against the ACA, a majority of the U.S. Supreme Court and the Obama Department of Justice were clear that the tax penalty was an essential component of the law, they said. And when it upheld the ACA, the Supreme Court’s majority decision stated that without the tax penalty, the mandate that individuals purchase health insurance was an unconstitutional exercise of federal power.

Providers and insurers were among groups against the lawsuit and supporting upholding the ACA.

House Ways and Means Committee Chairman Richard E. Neal (D-Mass.) said, “By filing their brief in support of California v. Texas, the Trump Administration is continuing their shameless sabotage of our healthcare system at a time when they should be singularly focused on helping the country through a global health crisis. There is no logical reason to threaten critical protections for those with pre-existing conditions or to dismantle the law and drive up costs system-wide. Americans are relying on their health insurance now more than ever.”

House Speaker Nancy Pelosi said, “President Trump and the Republicans’ campaign to rip away the protections and benefits of the Affordable Care Act in the middle of the coronavirus crisis is an act of unfathomable cruelty. If President Trump gets his way, 130 million Americans with pre-existing conditions will lose the ACA’s lifesaving protections and 23 million Americans will lose their health coverage entirely. There is no legal justification and no moral excuse for the Trump Administration’s disastrous efforts to take away Americans’ healthcare.”