Why police brutality is a matter of public health 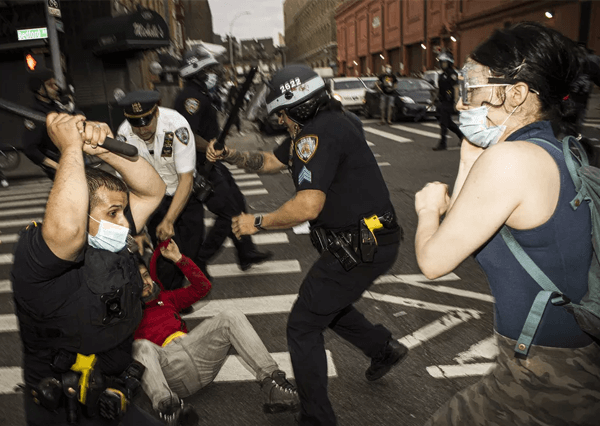 Thousands of protestors across America have marched and rallied to denounce the police violence and misconduct that led to the killing of George Floyd in Minneapolis, Ahmaud Arbery in Georgia and other examples of death and injury by police officers or vigilantes.

As Rev. Al Sharpton delivered a forceful eulogy for George Floyd condemning the violence, health equity experts and advocates met in an AMA livestream panel to discuss the relationship between police brutality, systemic racism and health equity in a time of pandemic.

“These are trying times. I feel tried. I feel pushed,” said panelist Rhea Boyd, MD, MPH, a pediatrician and director of equity and justice at the California Children’s Trust in Palo Alto, California. “One of every 2,000 African-Americans has died of COVID, and we have to watch Ahmaud Arbery get lynched and George Floyd get publicly executed.”

The sense of inequity is supported by statistics, she said, and they show that racism, police violence and politics are all connected. “We know that in the United States, about 1,000 people die at the hands of police. African Americans are three times more likely to die than their white counterparts during a police encounter, and 2018 statistics from the National Academy of Science indicated that one in 1,000 African American men or boys will be killed by police in their lifetime.”

“People are dying. That’s our business, whether they are dying through a slow violence, such as structural racism, or COVID-19 or direct violence, like police brutality,” she said. “If death and injury are outcomes of any disease, we in the health space have a responsibility to understand why—and to act.”

The AMA is taking a powerful stance against police brutality and the detrimental effects that racism and violence have on health, and is calling on government stakeholders to make systemic changes in both our criminal justice and health systems.

The AMA views excessive police force as a communal violence that significantly drives unnecessary and costly injury, and premature morbidity and death.

Change to death investigations could help

While mountains of research has documented inequities in health care delivery and outcomes, Dr. Mitchell noted, additional research and record-keeping is necessary to document “death in custody,” a term that encompasses a spectrum of deaths ranging from police apprehension through incarceration.

Dr. Mitchell, D.C.’s chief medical examiner, called for a change to the standard death certificate to include a check box that would categorize deaths in custody and create a new statistical grouping with explanations of the range of causes within the spectrum of custody. That would run from investigation through long-term incarceration and the activities within custody that led to death.